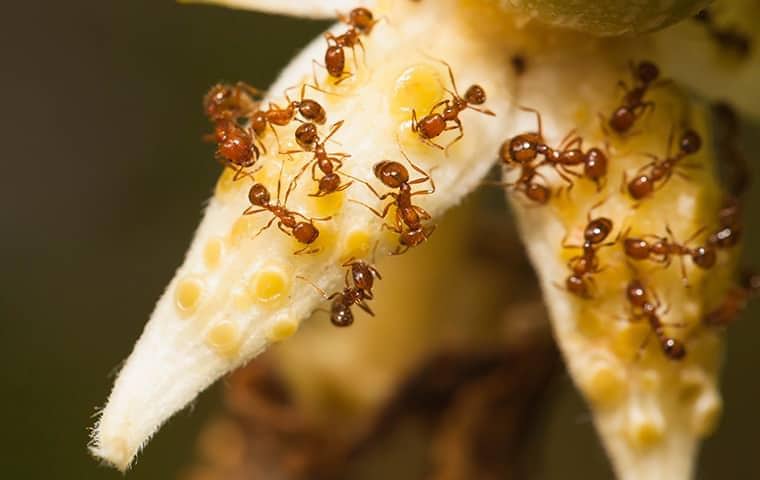 Which Fire Ant Is a Common Problem in Texas?

Solenopsis Invicta, or the red imported fire ant, has become a major concern for homeowners in recent years. This invasive species originated in Brazil and was introduced to the United States during the 1940s. Since then it has become a serious pest and a detriment to both United States ecology and native ant species in the south. They are now commonly seen from Maryland to Texas and have been reported as far west as New Mexico and California.

Fire ants are small, dark reddish-brown insects, measuring about 3/8ths of an inch as adults. Their appearance can be difficult to distinguish from many other native ant species. If you suspect that you have a red fire ant infestation, it is important to consult a professional, as treatment methods may vary, depending on the species.

Red fire ants owe their name to their ability to inflict “fiery” bites and stings. A bite from one of these ants is quite itchy and can cause pustules to form on the skin. The danger with fire ants is that they most often move in large numbers. This means that you are more likely to be bitten or stung by multiple ants, rather than just one. An ant attack is capable of injuring, or even killing, an animal or person if enough ants are disturbed at one time.

Where Do Fire Ants Infest?

Fire ants live communally in large constructed mounds. A large colony can build a home that is significant enough to damage mowing equipment or to cause structural damage when built inside a building. On average, these mounds measure about 12 by 12 inches in width and height and can contain upwards of 100,000 ants per mound. They are most commonly found in sunny, open areas, such as lawns and fields. Fire ants extend their territory by burrowing outwards up to a mile during breeding season. This means that a neighbor’s fire ant colony could easily move into your lawn. Ants can also be spread with commercially bought sod or grass.

How Do I Get Rid of Fire Ants?

One of the most common and inefficient ways to treat an ant infestation is to try and eliminate one mound at a time. Family offers a more effective fire ant control plan utilizing a product that treats the whole yard as well as surrounding shrubs and flower beds, to ensure that all ants are eradicated.

Does the Fire Ant Control Come With a Warranty?

Red fire ants can be difficult to remove once they are established, so Family provides its customers with a one-year warranty. The product we use and apply to your lawn has an effective period of one full year.

How Do I Prevent Fire Ants From Taking Over My Yard?

Fire ants are invasive and difficult to control for the common homeowner. Aside from breeding readily and creating colonies in a wide variety of environments, they also have no natural predators. This means that fire ant populations can only be controlled with deliberate and methodical eradication. This process is best handled by a professional to ensure that fire ants do not return to your yard.