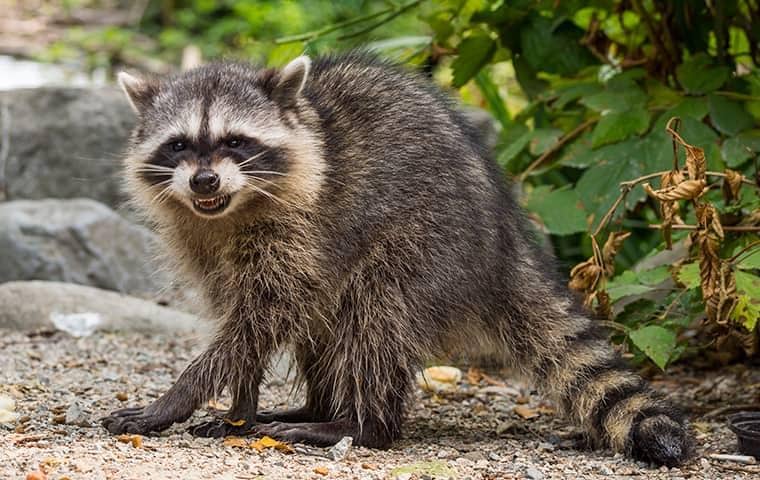 Raccoons are medium-sized mammals, averaging two to three feet in length, and are covered in short salt and pepper-colored fur. They have distinct facial markings that form a black mask over their eyes. Raccoons have a characteristically long tail that is covered in a black, ring-like pattern. Baby and adolescent raccoons carry much of the same markings as adults.

Raccoons are generally peaceful animals, but they can become defensive if cornered. Raccoons are almost never overtly aggressive unless they have contracted a disease such as rabies. Raccoons can carry rabies and spread the disease through bites. Infected animals are usually easy to spot, as they will exhibit behaviors that are not normal for healthy raccoons. They may be observed walking or stumbling in broad daylight and in open areas. They may appear to be disoriented, and their fur will generally look unkempt and rumpled. They are also known to be more aggressive and much more vocal when they are rabid. Other characteristic signs of rabies infection include foaming at the mouth and watery eyes. If you encounter animals that you suspect are infected, it is recommended that you immediately contact a wildlife professional. Do not attempt to trap or move the animals yourself.

What Should I Do If I Find Adult Raccoons And/Or Babies in My Attic?

Do not attempt to move the animal or animals on your own. Raccoons are generally not aggressive, but mothers caring for young may become defensive or aggressive if they believe that they are in danger. Contact a local wildlife control company at the first sign of a raccoon problem.

How Do I Get Rid of Raccoons?

If you suspect that you have raccoons living on your property, or in your home, do not attempt to move them. Raccoons are smart animals. They will simply return and create a new nest, even if ousted from their current stronghold. Family utilizes effective wildlife control services that will prevent these pests from returning to your home. To schedule an appointment, or to discuss your treatment options with one of our trained professionals, call for your free estimate.Family Pest’s Raccoon Prevention Tips:

Here are some preventative measures that you can take to keep raccoons out:

MORE ABOUT US
All Reviews