There are many common pests that you might identify as “scary.” Whether it’s a spider crawling up your wall or a cockroach skittering across your kitchen floor at night, some pests are simply terrifying to find in your San Antonio home. Out of all the creepy pests that invade homes, earwigs are often described as the most terrifying. But are earwigs as dangerous as they look? Read on to find out. 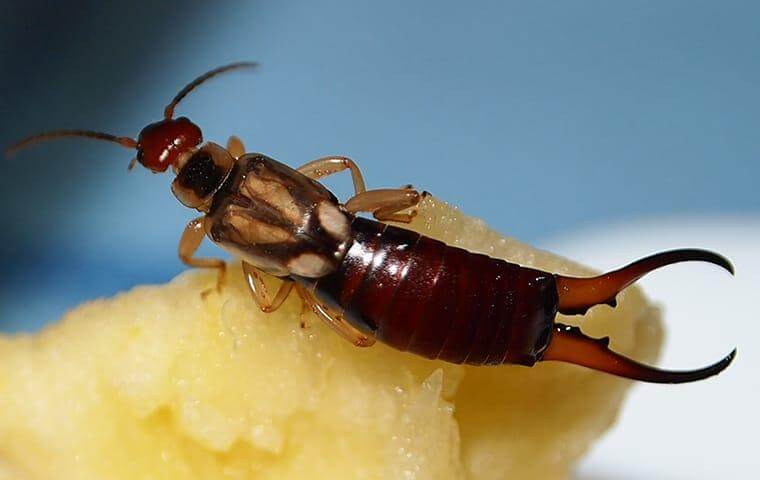 Earwigs are about half an inch long and have dark brown or reddish-colored bodies. These small insects have large pincers protruding from the end of their abdomens, which gives them a disturbing appearance. Earwigs also have lighter-colored legs and two long antennae on their heads. There is a myth that says earwigs will crawl into your ears while you’re sleeping and lay eggs in your brain. However, this suspicion is entirely untrue. Many people believe that this is how earwigs got their name. Earwigs are a type of insect that only invade San Antonio homes under certain circumstances. They are occasional invaders that thrive in dark, damp areas.

Despite their menacing appearance the myths surrounding their name, earwigs aren’t dangerous at all. They rarely pinch humans, and when they do, it is almost never painful and doesn’t break the skin. Earwigs don’t bite, sting, or cause physical harm to people. They aren’t known to spread around bacteria or transmit diseases either. Earwigs are considered nuisance pests because of their tendency to invade homes in large numbers. Earwig infestations are often difficult to remove from your property, especially without professional help.

Why Do Earwigs Invade?

Like many other insect pests, earwigs are attracted to moisture, along with darkness and decaying matter. Earwigs will hide in leaf litter, under trash cans, and anywhere else that provides moisture and darkness. Common hiding spaces for earwigs include laundry rooms, basements, bathrooms, kitchens, and other moisture-rich areas of your San Antonio home. Sealing cracks and reducing moisture problems around your property is a big step you can take to prevent earwig infestations. A few other ways you can avoid attracting earwigs to your home include:

If earwigs still manage to invade your San Antonio home, it might be time to reach out to the professionals here at Family Pest Control. While spotting one or two earwigs around your home might not be a big issue, most earwigs invade in large numbers. If you suspect earwigs are infesting your property, don’t hesitate to contact one of our licensed pest technicians. At Family Pest Control, we strive to provide the best customer service and pest control options available. Reach out to us today for help with your pest control needs.